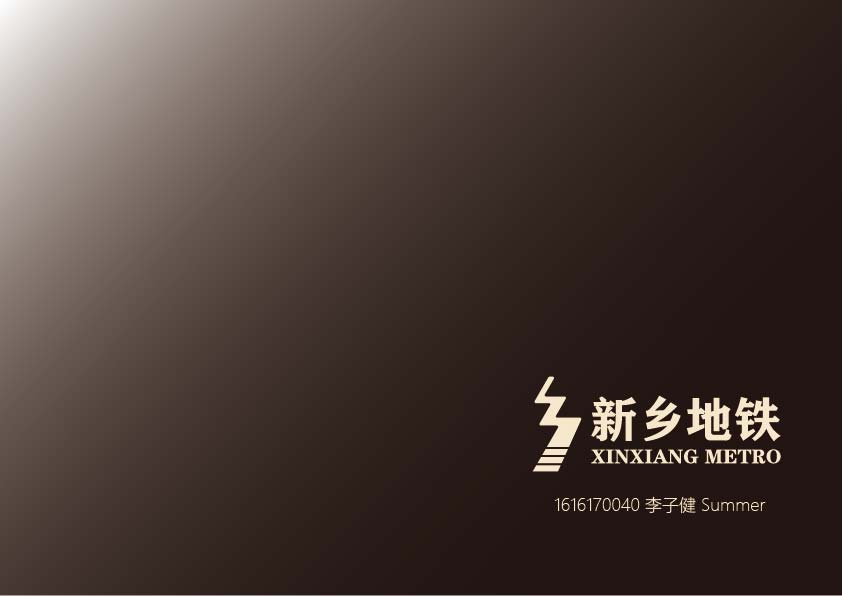 As a kind of public transportation resources, subway is of great importance to the situation of large population and short of land resources in China.

As a kind of public transportation resources, subway is of great importance to the situation of large population and short of land resources in China. It can greatly relieve the traffic pressure of the city, make contribution to environmental protection, and provide people with safe and fast transportation modes.Out of my love for my hometown, I decided to design a new subway brand for my hometown. My hometown is Xinxiang City, Henan Province, which is a small three line city.

This draft is my first idea. Its essence is to use M and X to form a logo. M's meaning is the abbreviation of metro, and X's meaning is the initial of Xinxiang.The second idea is about the geographical location of Xinxiang. The northern part of Xinxiang City is Taihang Mountains. Another is the meaning of M. I want to draw a logo with the shape of rolling mountains and the letter of M.This is my initial idea. Later, I changed my design.After negotiation with my teacher, I changed my logo. The former m only had the function of subway, and it didn't make people understand that it was Xinxiang subway. So I started a new logo design from the word"Xiang".

At the beginning, my idea was m, that is, Metro. That's all. But my tutor taught me that such a logo only represents the function of the subway, which can't make people realize that it's the logo of Xinxiang subway, and gave me several examples, such as the logo of Guangzhou subway, another name of Guangzhou is Yangcheng, so his logo is very similar to the horn of the sheep; another example is the logo of Zhengzhou subway, which at first glance looks like a railway extending in all directions, and it's a Chinese character when you look carefully The Chinese character in Henan dialect means affirmation or certainty, which means Zhengzhou Metro is very good. At the beginning of my design, there was no regional expression, only the function of the subway, so I started to work on the name of Xinxiang. I thought that Xiang was a good logo prototype, so I combined two elements of Xiang and m.

Although in today's highly developed technology, most people use mobile phones and other mobile devices to buy tickets when taking the subway, and they don't use old-fashioned tickets very much, but that's the choice of young people. Most elderly people don't use smart devices such as mobile phones. They can only buy tickets in front of the ticket machine by cash. So I have designed three kinds of subway cards, namely, one-way card, round-trip card and one-way card. As the name suggests, one can take the subway one time and put the card into the recycle port after arriving at the station. The round-trip card is the starting station you choose Use twice between and key stations. One card is a kind of long-term card, which can be stored after being handled by relevant departments, and the fee will be deducted every time when taking the subway, and this kind of card can be kept by individuals for a long time.

Today, with the development of science and technology, people are inseparable from the network, so the design of the website is also very important. I use the same design method as the design app, and the main color is my logo color, bright orange. Basically, I don't use other auxiliary colors or colors. In terms of design style, my website is very simple and direct So that those who have needs can find their own projects at the first sight. Some commonly used categories are in prominent positions, such as line query, key sites, and convenient for people to find.

Xinxiang Metro mobile application is a product designed to let users better understand the value of the product itself. Because in today's highly developed technology, the widespread use of mobile phones has promoted the development of human beings. For Metro brands, the importance of mobile app is self-evident. It can help people to query sites, lines, and quickly contact staff to help you solve problems when encountering special circumstances. Compared with the website, the convenience of mobile applications is more convenient Far bigger than a website, it can solve your problems almost any time you need.

Development of sketch and computer drawing

His name is"believe", which is the homophony of the word"Xinxiang". It means that my hometown can own its own subway in the near future, and I believe that my hometown can develop better and better. My original intention of designing the subway is to improve the living standards of the residents, improve the serious haze in my hometown, and make a contribution to the environmental protection. In short, his name is to hope himself My hometown is getting better and better.

Mascot has a unique symbolic meaning, which originated from totem art. In modern society, its connotation and value have been greatly extended and developed, which means people, animals or objects that can bring good luck. Nowadays, large-scale activities and enterprises adopt mascot image, and have newer and faster communication methods, such as TV and Internet, to bring more people the joy of good luck.

Mascots, as an important part of the visual identification system for the brand construction of modern enterprises or major events, have been widely used in recent years. Almost every new technology co color or major event has launched its own mascots. Mascots do not need the high endorsement cost of stars, and do not need the single shoe to affect the social popularity of the enterprise due to the negative personal image of the spokesperson, and have a long life, It has been more than 100 years since the birth of the Michelin mascot tire man"Biden". Corporate mascots play an important role in strengthening corporate character and promoting corporate image, and bring more economic value to the enterprise.

My poster design also uses the previous design style: simple and direct. The slogan of Xinxiang subway is “与你相豫”，The surface meaning of this sentence in Chinese is to meet you, but I used “豫” in this word.Originally, this sentence is “与你相遇”，Because this ”豫“ is the abbreviation of Henan, and the pronunciation is the same, so I used this sentence as my slogan, which not only has the regional logo, but also indicates that Xinxiang Metro will meet with the people in the near future and make its own contribution to the development of Xinxiang City.

As an indispensable mode of transportation now, more and more cities begin to build subway. This is the first time for me to design subway brand. There are many loopholes and design errors, especially in color selection and matching. This is also part of my future study. Moreover, this project is to design subway brand for my hometown. I also hope my hometown can Build your own subway, so as to improve the quality of life of the people in your hometown.